Reflections are common in her work. In her series, Cactus, fragmented reflections on choppy seas at the bottom of cliff faces are depicted in broad broken brush strokes in bold short stripes of saturated colour. In a later series of work, Constant Change (1990-1995), (exhibited at the Wagga Wagga Regional Gallery in 1995), where Pearse describes her work as ‘starting to calm down’, reflections dominate many of the works. The reflections take the form of the moon over a lake, or clouds over water, or a juxtaposition of the moon and sun, or the repetition of shape between a circular moon and semicircular hill-top. They are depicted with a smoother paint surface and blended colours, achieved by skillful under-painting. 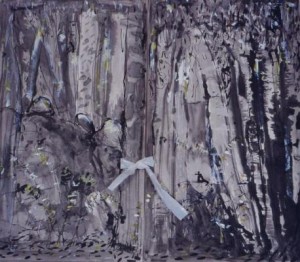 Reflections on life and the environment are also characteristic of Pearse’s approach to her life and work. An earlier exhibition of her work, A Case of Conscience (Bondi Pavillion, 1993), featuring works done in the Coolangubra Forest near Bega in NSW, was a comment on the destruction of the environment by logging. Works in this exhibition showed the incidence of the loss of our forests in subtle ways. Dozer Entry, 1993, for instance, exposed the loggers’ language of, for example, an innocent white ribbon tied to a tree indicating the site of the bulldozer entry. Four drawings, Blueprint for a forest i-iv, indicated that the forests may be irreplaceable.

Next theme Presence, Absence and Transience